Sundance let us trim his feet on July 1st.

Not just with “we barely got the job done trimming” tolerance, either, but honest to goodness, all in cooperation for the first time in the five years he’s lived with me. And not only did he cooperate but he acted like he’d had his feet trimmed like this his whole life. Feet in the cradle, swung forward onto the hoof stand, nipped, rasped, even conditioned. He contained himself. I did not have to restrain him. And that’s not because I spent hours upon hours picking up his feet and ‘training’ him to accept this work. He allowed it because I recognized the problem that was preventing his cooperation and we resolved it sufficiently that he could. 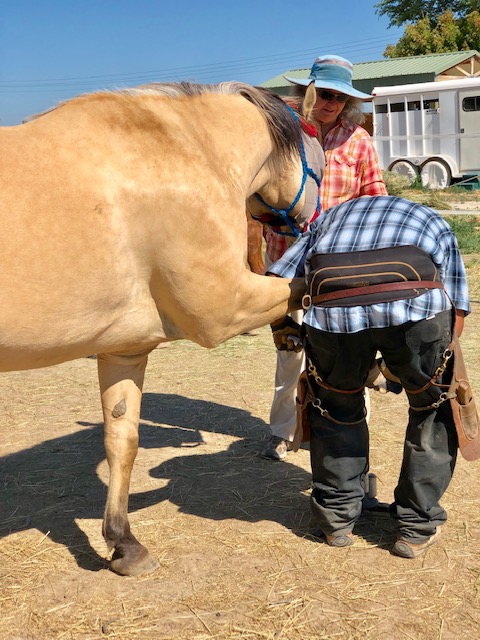 I could look at this as ‘bad behavior’ or a ‘training issue’ to be tackled. Instead I saw it as communication. He let me know, in the only way he knew how, that I was not on the right track. I spent a lot of time with Sunny this year reassuring him that I could listen. He got a lot of bodywork. A lot of layers of old physical and emotional trauma got worked through. He became more open minded about being haltered. We started him on some pain management. And slowly he began to trust us enough to communicate even more.

He began allowing me to pick up his front feet for moments at a time. Sometimes I could even trim a little here and there but then I’d lose him again. I kept trying different approaches, watching, feeling, seeking the underlying cause for his difficulty – because clearly this was not simply Sundance saying ‘I don’t want to’ – this was Sundance saying ‘I can’t’. One day while I was asking him to explore the idea of shifting his weight enough that he could give me his left front, he offered it up. ‘Good boy!’ By observing and feeling what was happening in his whole body while I held up that front leg, I realized he was desperately trying to find stability in his pelvis, and couldn’t. He literally did not have the strength and coordination to balance on three legs.

The only reason I discovered the true nature of Sundance’s concern with picking up his feet is that I never bypassed the issue by punishing him for taking a foot away, or succumbing to the intense temptation to clicker train him to accept having his feet handled. You see, this wasn’t about teaching Sundance to accept having his feet trimmed to satisfy my need to have his feet look good. My need to have him be sound so that I look like I know what I’m doing. Nor was it about assuming Sundance has his reasons for wanting his feet this way. This was about discovering what Sundance was trying to tell me by not letting me work with his feet. Soundness only happens, in my experience, when a horse feels safe and has a sense of purpose. What incentive does a horse have to be sound and healthy if no one listens to them anyway? Better to stay lame and be left alone…

Sundance a few years ago. Always with one foot out the door.

Horses communicate non-verbally. They use their entire body as an instrument of communication. Every movement, every gesture means something. What is meaningful to a horse is our capacity to communicate clearly with our own body language, and be appropriately responsive to theirs. A conversation ensues when I ask a question by say, walking towards Sundance with the halter. He answers my question via his response. I approach with the halter and he walks away. That’s just the beginning of the conversation, not the end. By walking away, he lets me know, in simplest terms, that he’s not okay with being haltered. That doesn’t mean he won’t change his mind in a few minutes. He has a right to say no, absolutely, but if I’m going to help him, I have to be willing to repeat the question a few times. Ask a few different ways and dig deeper into why he’s saying no.

When Sundance walks away, he’s reminding me that his body hurts. He’s letting me know he has no idea what I’m going to ask him to do and he’s worried about it. I see it as my job to reassure him. Now that I know he can’t keep his balance I have to find a way to do some physical therapy style ground work to help him build functional strength and balance control. But he doesn’t know what I have in mind and it might hurt! I’ve spent the last five years cultivating a relationship with this horse so when he does allow me to put the halter on he’s willing to engage in conversation instead of having one foot out the door. I know he’s mentally ready for this work.

It takes some experimentation to figure out how to create a body language conversation that meets Sunny’s needs – both physical and emotional. He’s so lame that it’s not a question of doing normal things we might consider doing to get a horse in better shape. Any movement he engages in that reinforces protecting the injured/weak areas is only making the overall situation worse. With a lame horse we walk. Think Tai Chi walk. Mindful, self-contained, focused on balance control. One. Step. At. A. Time.

It doesn’t work if I just grab hold of the halter and make him walk while physically restraining him every stride. First of all, that is not a conversation. More importantly, he isn’t able to feel into his own pattern and become aware of it. I can’t focus on him walking slowly as a training goal. It’s a conversation about balance, self-control and self-awareness.

Try taking something you do every day – like walking – and slow it way down. Slow it down to where you are literally taking one step at a time and feeling the nuances of each of those steps. If you do this all the time it’ll be easy, but if you never slow down this much you quickly discover how hard it is to keep your balance, how you fall from one step into the other with little control. It’s hard work both mentally and physically, to break something we do all the time down into such small chunks. If walking is easy try getting down onto the floor or sitting in a chair slowly and mindfully. What muscles have to work? Which ones have to let go? Can you control the movement all the way up and all the way down or do you fall into it?

This is what I’m asking Sundance to do. Pause.

Feel how you are carrying all your weight on your left front.

Can you shift your weight off of that leg and find your center of gravity?

Can you take a step without falling forward?

It takes time for him to research and explore his balance to even take one step. Once in motion he’ll want to default to his normal, shuffling, hurried gait. That’s how he learned to move to work around the parts that hurt, the parts that don’t feel stable. I’m asking him to move through the painful, dicey places to restore healthy mobility because the shuffling gait is only reinforcing his weakness and lameness. He has to relearn how to walk and move in a way that builds his strength in a functional way.

I know I’m on the right track because Sundance meets me at the gate most days now. He may still walk away when I bring out the halter if he’s had a few days off, but once we start back into our routine, he happily accepts the halter at the gate. He does this because what we’re doing together has tangible benefit to him. He is feeling better in his body and he feels better in his mind. He’s learning to curb his impulsiveness and take his time. He’s learning he won’t get punished if he doesn’t hurry up and find the right answer. He no longer has to guess what I want because he’s responding to my very precise body language cues. There is no force here. It’s all conversation. Responding fluidly to one another.

That’s how Sundance came to be capable of standing quietly and having all four feet trimmed. Because we engaged in an ongoing conversation that took place over years of building trust between us. A conversation is adaptable, scalable and unique to each horse and human pair.

4 thoughts on “Sundance got his feet trimmed!”