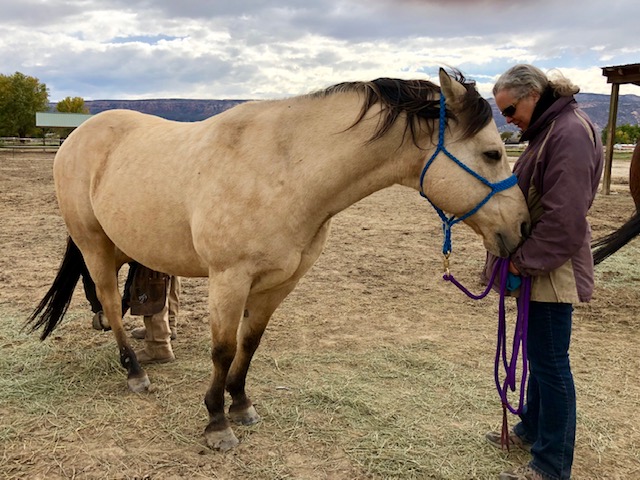 If you follow my posts about trimming feet, you know this is cause for celebration around here! More than a year ago I made the commitment not to force him to have his feet trimmed. Every time we muddled our way through to get the job done it set us back in the trust department. I suppose I could have sedated him or used treats to worm my way in but he is so dang smart. He feels tricked or betrayed easily.

This last year I made it a project to trim my own horse’s feet. It was shocking to discover the amount of worry each shared about having feet handled. As I offer them the opportunity to engage in a conversation about their feet being trimmed my awareness of the subtler aspects of communication deepens, and they feel free to share how they really feel. Understand we never did anything out of the ordinary here. No horses were abused or beaten. I work with patient, kind farriers.

It makes sense if you think about it. Horses have a nervous system designed to prioritize coordination of movement. The ability to move is such a primal part of a horse feeling safe. And here we come along and ask them to stand quietly while we hold onto their leg. It is surprisingly difficult for an older horse, or a horse with physical issues to balance on three legs for any length of time. Every horse here falls into one of those categories. If said leg is held in a position that is uncomfortable, doubly so.

Noticing how he responds as I approach his shoulder with the intention of reaching for a front leg, Sundance used to react with a dramatic arching of his neck, a small snort as he hastily sidestepped away. I learned to recognize the feeling of anxiety, stop everything and just breathe in order to avoid his exiting stage left. Once I slowed down, working with him gently and progressively, it was so clear he simply could not hold his balance long enough to stand with a foot up.

Sundance has been a complicated case. I know he has physical issues but he is wound so tight, so skeptical and resentful of human agenda, as to make it nearly impossible to accurately evaluate his physical challenges. If he even thinks I might try to tell him what to do he exits stage left, carting me off toward the paddock that has become his safe space. Make no mistake, this is not disobedience, this is not rude behavior, this is pain, fear, and anxiety. Every time we explored past his comfort zone and he carted me off to his safety zone I lost him, sometimes for weeks. He would refuse to come near me, especially if I had a halter. This is not about correcting bad behavior this is about helping him recover from his traumatic experiences at the hands of humans. It is about giving him a voice…

Before he came to me his previous owners tried to have his issues diagnosed. Vets could only guess what might be going on. It is really challenging to diagnose lameness in a horse when they are wound so tight. The mental emotional anxiety translates into physical tension and reactivity to being touched or handled. Add to that that horses are masters of disguise. They make it their business not to limp around like predator bait. If we act like predators there is no advantage to showing us they are lame! Sundance had to learn to trust me implicitly, to feel safe here, in order to show me his physical and emotional vulnerability.

That trust burgeoned when I started working with his feet. As he realized I was not going to force him, or punish him, or grab that leg and hang on, he began trying to figure out how to have a conversation with me. We treated working with his legs as physical therapy. I had to find a way to ask him to lift his left front leg without causing him to lose his balance and fall to the right. He had to explore how to find his balance on his vulnerable hindquarters. Where he used to be defensive about me moving past his shoulders he began turning his butt to me, placing me in spots he felt needed attention.

Finally, he was allowing me to help him release the patterns of anxiety that kept him from opening up before. Then we had the luck of having Dr. Madalyn Ward come to visit. She confirmed my suspicions about his physical issues, releasing some of the worst scar tissue from his gelding scar she had ever encountered. I felt the same and had done what I knew how to do to release it, but it was so much more extensive than I knew how to work with. His whole nervous system shifted gears after that, all the excess tension melting from his body. He looked terrible for about a week as he figured out how to move without all that tension!

With all the horses doing so well with their feet I decided to try a new farrier. The night before he came I approached Sundance and asked if he was game to try again. He let me pick up and clean all four feet with only a tiny bit of trepidation. I told him I thought he was ready and we would try tomorrow.

Having a new farrier come after all this work to rebuild my horse’s confidence was a bit nerve wracking. AJ proved to be well educated and kind, willing to listen to my requests about how to work with these guys. As he worked on Huey’s feet Sundance wandered over to observe. This is how Sundance has learned to cope with most of the stuff we humans do with horses. He wanders over and watches, sticks his nose in and investigates. He decides after that if he is interested in trying it himself.

When we finished with Huey I asked Sunny if he wanted to try. At first he thought about bailing out but when I asked him if he could try again he stopped, allowing me to halter him. All of the horses I work with show me that it is easier for them if I pick out all four feet first. It sets the tone of the conversation and they begin to find their balance, understanding what is coming. Sundance held his breath and only breathed a sigh of relief when he realized AJ was listening, and working with his mind and body. 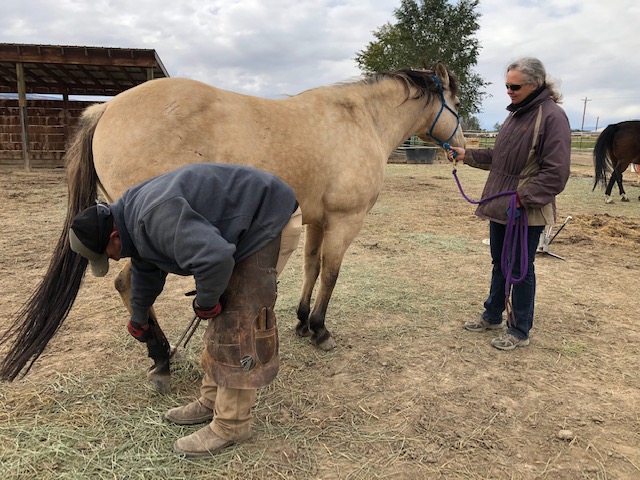 A little empathy and patience go a long way. Sundance got all four feet trimmed. Rasping can come another day. Sundance was flat shocked when he got a handful of treats from this relative stranger for doing something so simple. Those of you that know him, know he wears his heart on his sleeve. His expression of shock, such an eloquent statement that he expected to be asked for more than he could give. He expected to be punished or criticized. Instead he was rewarded, praised and thanked for his efforts. I see him letting his guard down inch by inch. This experience has him thinking. I will not let him down as we continue onward.

AJ giving Sunny a handful of treats. He was so surprised by how little he had to do to get praise!

A big thank you to Dr. Madalyn Ward DVM and A.J. at Cochise Horseshoeing for playing their roles in our journey!